We can “see” and "reveal" what existing tools cannot easily detect: few layers of hydration water on proteins, membrane materials and catalyst surfaces or the structure of chemically active sites. 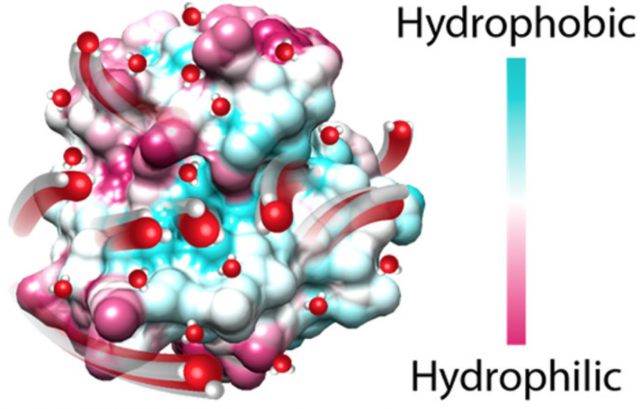 The heterogeneity in the hydration water dynamics suggests that structured proteins have the capacity to encode information into the surrounding hydration shell.

Hydration water on the surface of a protein is thought to mediate the thermodynamics of protein–ligand interactions. For hydration water to play a role beyond modulating global protein solubility or stability, the thermodynamic properties of hydration water must reflect on the properties of the heterogeneous protein surface and thus spatially vary over the protein surface. In a recent study, the Han lab employed Overhauser dynamic nuclear polarization (ODNP) to probe the equilibrium hydration water dynamics at select sites on the surface of Chemotaxis Y (CheY) in dilute solution. ODNP reports on site-specific hydration water dynamics within 5–10 Å of a label tethered to the biomolecular surface on two separate time scales of motion, corresponding to diffusive water (DW) and protein–water coupled motions, referred to as bound water (BW).

Remarkably, ODNP measurements of protein surface-coupled water are performed in dilute solution (> 10 mM), in the full presence of bulk water. Because DW is freely exchanging between the protein surface within 3-4 water layers and bulk water, it was not clear prior to this study whether the DW dynamics would be averaged out or show site-to-site variation on a protein surface. The state of art was that the heterogeneity of equilibrium water dynamics on a protein surface has not been experimentally captured until this study conducted by the Han lab. The Han lab's ODNP study sheds light on this question for the first time by unambiguously demonstrating that the DW dynamics is highly heterogeneous around the CheY surface. The DW dynamics on hydrophilic surface sites was found to correlate with the local excluded volume. Remarkably, the more hydrophobic sites were found to be hydrated with slower diffusing water. The theory is that hydrophobic sites of size < 1 nm leads to local ordering of water, with reinforced hydrogen bonding to neighboring water, to compensate for its inability to effectively H-bond to this hydrophobic site. The implication is that these sites store significant solvation entropy to be released upon binding by eviction of partially ordered water populations. The heterogeneity in the hydration water dynamics suggests that proteins have the capacity to encode information in its surrounding hydration shell. This finding provides a basis to rationalize how hydration water tunes protein activity. For hydration water to play a role in modulating protein binding and activity, the thermodynamic properties of hydration water must reflect on the heterogeneous protein surface property, and thus spatially vary over the protein surface. The goal of the Han lab is to decode the molecular basis of surface programing of hydration water dynamics. Current efforts focus on both globular and intrinsically disordered protein surfaces, polymer membrane interfaces, as well as silica surfaces. 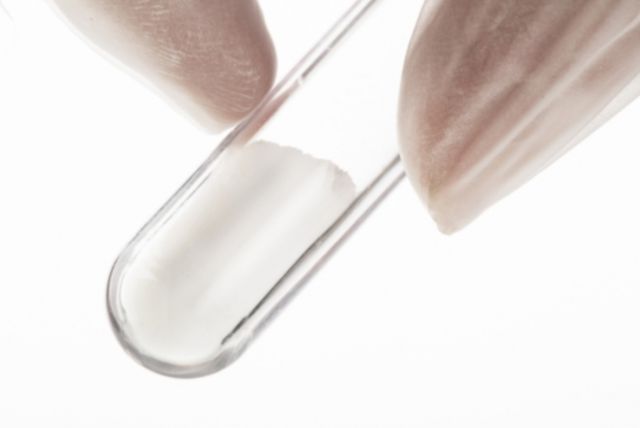 A critical silanol cluster size or connectivity parameter could explain the sharp transition in our results, and can modulate wettability, colloidal interactions, and surface reactions, and thus is a phenomenon worth further investigation on silica and chemically heterogeneous surfaces.

An in-depth knowledge of the interaction of water with amorphous silica is critical to fundamental studies of interfacial hydration water, as well as to industrial processes such as catalysis, nanofabrication, and chromatography. Silica has a tunable surface comprising hydrophilic silanol groups and moderately hydrophobic siloxane groups that can be interchanged through thermal and chemical treatments. Despite extensive studies of silica surfaces, the influence of surface hydrophilicity and chemical topology on the molecular properties of interfacial water is not well understood. In past and ongoing studies, the Han lab has controllably altered the surface silanol density and surface hydrophobicity, and measured surface water diffusivity using Overhauser dynamic nuclear polarization (ODNP) and complementary silica–silica interaction forces across water using a surface forces apparatus (SFA). The results show that increased silanol density generally leads to slower water diffusivity and stronger silica–silica repulsion at short aqueous separations (less than ∼4 nm). The measurements identified sharp changes in hydration properties at intermediate silanol densities (2.0–2.9 nm−2). Molecular dynamics simulations of model silica–water interfaces performed by the Shell group correlated the increase in water diffusivity with silanol density, and furthermore found that even on a smooth and crystalline surface at a fixed silanol density, adjusting the spatial distribution of silanols resulted in a range of surface water diffusivities spanning ∼10%. We suggest that a critical silanol cluster size, connectivity parameter and a critical clustering size could explain the sharp transition in the observations, and can modulate the wettability, colloidal interactions, and surface reactions, and thus is a phenomenon worth further investigation on silica and otherwise chemically heterogeneous surfaces. Understanding surface-solvation property relationships is critical for catalysis, separation to many other important chemical and engineering processes. 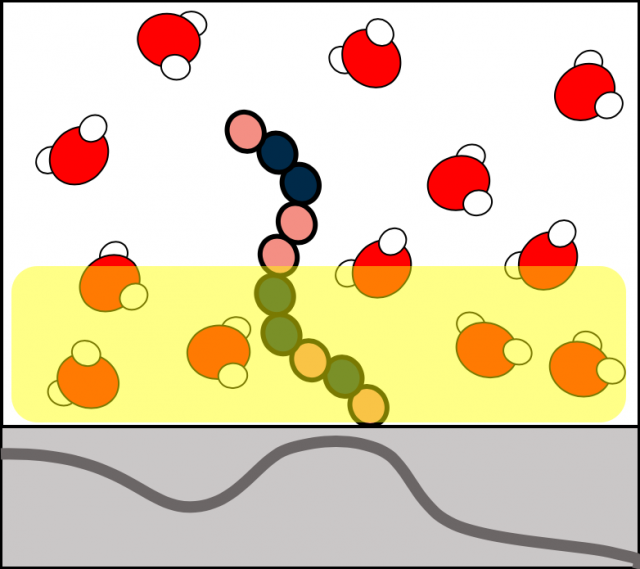 Han lab is part of a DOE funded Energy Frontier Research Center (EFRC) on MWET in a project focused on deciphering the surface programming of hydration and solute adsorption.

Controlling the interaction of water with polymer surfaces is crucial for membrane-based separations and the design of efficient membrane technologies. The Han lab is part of a DOE Energy Frontier Research Center (EFRC) on MWET (Materials for Water and Energy Systems) in a project focused on deciphering the surface programming of hydration and solute adsorption. The knowledge gap that this collaborative project seeks to address is the nature of the hydration layer as influenced by the polymer surface chemistry and topology. The studies rely on polymer platforms with polymer surface chemistry controlled by sequence-defined peptoids and cross-linked polymer surface hydrophobicity. The Han lab focuses on the study of water structure, dynamics, and thermodynamics on polymer surfaces with varying surface chemical topology. Results of these studies can provide fundamental structure-property relationships for hydration to rationally design membrane-water interfaces to achieve the desired function.