Electron and Nuclear Spins as Sensors and Detectors

To reveal "invisible" NMR signal of surfaces, active sites, and functional species of interest to catalysis and quantum materials. 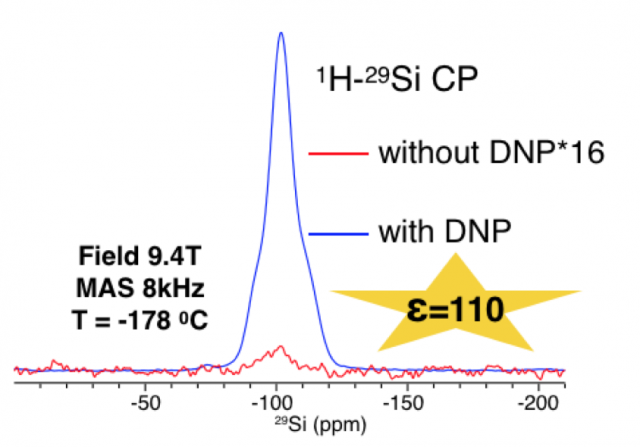 DNP normally requires exogenous polarizing agent (PA), to transfer polarization from its unpaired electron spins to coupled nearby nuclei, subsequently relayed to the bulk nuclei through the nuclear spin-diffusion mechanism. While many interesting applications of DNP-NMR have been demonstrated, there are major challenges that require new solutions. Among the challenges are the sensitization of broad-band transition metals for DNP, the operation of DNP at higher temperatures and high magnetic fields, and the precise control over electron-to-nuclear spin polarization and information transfer.

Among the different DNP mechanisms in insulating solids, the cross-effect (CE) is the most promising mechanism at high B0 and with currently available state of the art μw instrumentation. The CE relies on three-spin dynamics (two coupled electron spins, e, differently coupled to a nuclear spin, n), and is induced by two essential spin transitions: (i) the quantum mechanically allowed μw transition that depolarizes the ensemble of one of the two e spins involved in the CE transfer, thereby creating a large polarization difference between the two e spins relative to the n spin polarization, and (ii) the simultaneous flip–flop–flip of all three spins induced by second-order cross-terms between the e–e and e–n couplings. This is achieved when the CE resonance condition, |ωe1 − ωe2| = |ωn|, is satisfied. Maximizing the CE transfer therefore requires maximizing the transition probabilities of these two processes.

The Han lab is pursuing innovation in instrumentation, methods and theory to enhance the performance and scope of DNP, both by amplifying the efficiency of known CE mechanisms, and also by developing new DNP hyperpolarization schemes and theory. Recently, the Han lab presented a new design principle for a mixed broad (TEMPO) and narrow (Trityl) line radical to boost the dynamic nuclear polarization efficiency by electron spin density matching, and discovered that a narrow line radical can be exploited to reveal fast relaxing and broadened, and hence invisible, radical species in a mechanism dubbed truncated CE. 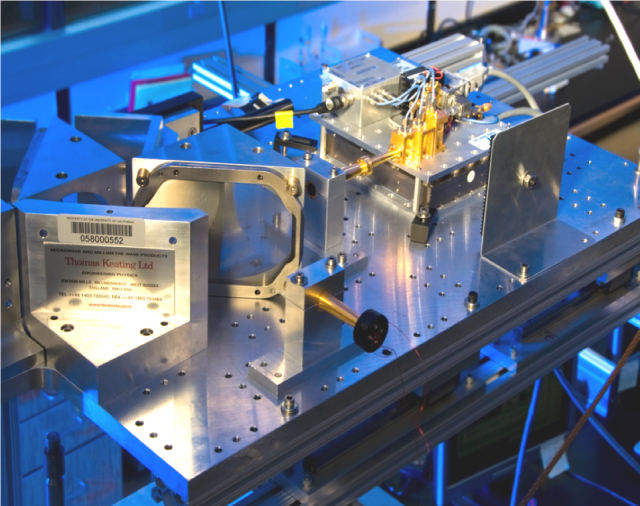 Dynamic nuclear polarization (DNP) is an increasingly popular technique, especially with the advent of commercial DNP systems. However, the design for reliable DNP experiments is limited primarily to a proven set of experimental conditions and sample types. What is understudied in DNP is the electron spins. This is attributed to a lack of commercial high‐field electron paramagnetic resonance (EPR) capabilities under DNP conditions. A rational design for DNP experiments requires the analysis of the mechanisms under a variety of sample formulations, requiring the study of both the nuclear and electron spin dynamics in the system.

The Han lab has built two different DNP platforms, one operating under static, and the other under magic angle spinning (MAS), conditions. A modular design ensures the versatility of such an instrument, where a solid‐state µw source permits high agility for electron spin manipulation. Hence, both static and MAS DNP systems operating at high‐field (6.9 T) are capable of broad band (188 - 201 GHz) irradiation and AWG manipulation. The static DNP platform operates at 3.5 K to room temperature and the MAS DNP at 25 K and up. Instrument developments are ongoing, for example towards achieving EPR and ELDOR detection under MAS conditions (so far, only demonstrated under static DNP conditions) or fully helium recirculating, sustained, operation of liquid helium temperatures. 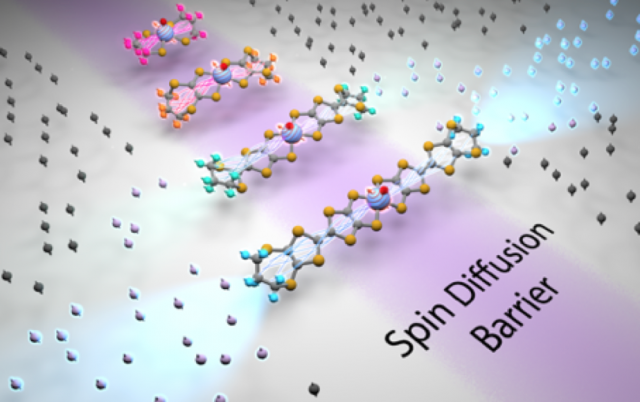 As vanadium is an important element in heterogeneous catalyst systems including metalloenzymes, the use of paramagnetic vanadium centers to selectively enhance and illuminate the NMR signal sensitivity around functional metal centers opens up new avenues for characterization of chemically active sites.

The Han lab, in collaboration with the Freedman lab, demonstrated for the first time dynamic nuclear polarization (DNP) of bound 1H species near V4+ metal sites used as endogenous polarizing agents. As vanadium is an important element in heterogeneous catalyst systems including metalloenzymes, the use of paramagnetic vanadium centers to selectively enhance and illuminate the NMR signal sensitivity around functional metal centers opens up new avenues for characterization of chemically active sites. This study is a pivotal step towards establishing endogenous transition metals for hyperfine DNP spectroscopy of active metal centers for chemistry in molecular and materials systems including batteries electrodes and heterogeneous catalysts. DNP-enhanced hyperfine NMR spectroscopy in the immediate vicinity of these metal centers would yield critical information on the structure of their surrounding or transport of the function-carrying species within these systems, while offering the much-needed sensitivity boost. 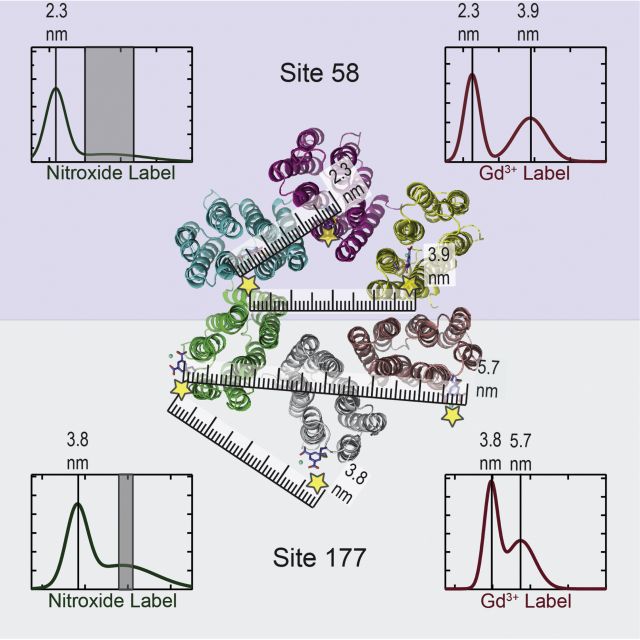 While nuclear spins are sensitive to Angstrom range distances, the magnetic dipolar coupling of electron spins can be used to detect distances in the few to 10 nm distance range. This is a critical distance range that allows us to detect distances and distance distribution, P(r), between protein domains, across membrane protein oligomers (as depicted in the image), of polymer end-to-end and of evolving protein conformers en route to aggregation to amyloid fibrils. These distance measurements are typically carried out using a pulsed EPR technique dubbed double electron-electron resonance (DEER) to extract the dipolar frequency distribution between a pair of spin labels. DEER requires vitrification of samples and pulsed EPR measurements, ideally performed at Q-band frequencies using high microwave power. The spin labels are typically nitroxides or Gd3+-chelating probes, introduced by site-specific functionalization to the protein, polymers or other surfaces. Continuous wave (cw) EPR techniques can also be employed for distance measurements. The disadvantage of cw EPR is that data interpretation is more tenuous and the sensitivity to longer distances limited, while the major benefit is that cw dipolar EPR can be performed under ambient solution conditions. The Han lab is equipped to perform pulsed DEER at X- and Q-band frequencies, and cw dipolar EPR at X-, Q- and D-band (200-240 GHz) frequencies. Distance measurements routinely accompany many characterization studies. 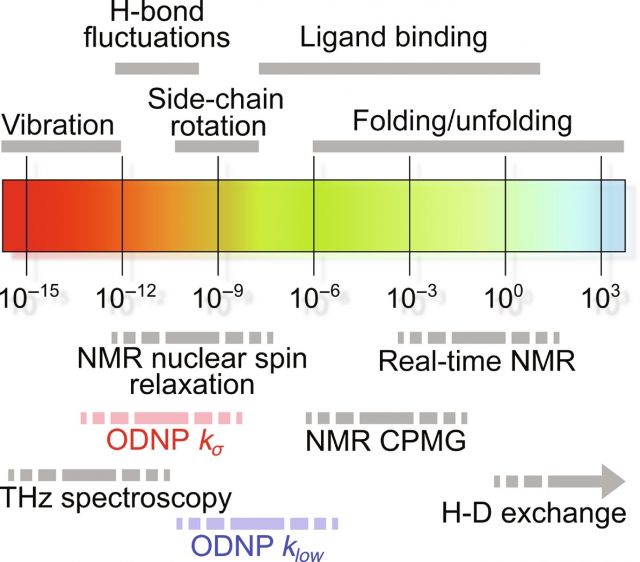 ODNP can capture ps–ns movements of hydration waters with high sensitivity and locality, even in samples with protein concentrations as dilute as 10 µM.

The Han lab invented Overhauser dynamic nuclear polarization (ODNP)-amplified NMR relaxometry of water for highly localized measurements of hydration dynamics on the surface and interface of biological systems. As ODNP relies on the pairwise cross-relaxation between the electron spin of a spin probe and a proton nuclear spin of water, it captures the dynamics of single-particle diffusion of an ensemble of water molecules moving near the spin probe. ODNP principally utilizes the same physics as other nuclear magnetic resonance (NMR) relaxometry techniques. However, in ODNP, electron paramagnetic resonance (EPR) excites the electron spins probes and their high net polarization acts as a signal amplifier. Furthermore, it renders ODNP parameters highly sensitive to water moving at rates commensurate with the EPR frequency of the spin probe (typically 10 GHz). Critically, ODNP selectively and unambiguously enhances the NMR signal contributions of water moving within close proximity to the spin label. As a result, ODNP can capture ps–ns movements of hydration waters with high sensitivity and locality, even in samples with protein concentrations as dilute as 10 µM.

Interest in the functional role of water in its interactions with biological surfaces is profound and longstanding, but has been subject of contention. This is due in part to the lack of experimental techniques that can directly measure the dynamic surface water landscape of biomolecular systems under physiological solution conditions and with site- and surface-specificity—precisely the operating capability of ODNP 1H-relaxometry. After developing the ODNP tool based on a dual, electron and nuclear spin magnetic resonance instrument and concurrent theory, the Han lab has applied this tool to gain insight in protein folding, early protein aggregation, membrane protein structure, Gro-EL/ES function, DNA processivity, cell membrane biophysics to polymer assembly. The ODNP instrument has now reached dissemination stage, and is commercialized by Bridge12. Other innovations driven by 1H ODNP include the hyperpolarization of water as an injectable, blood-brain-barrier traversing contrast agent to visualize brain perfusion, demonstrated upon tail vein injection in vivo in rat. The current focus of the Han lab with the ODNP tool is to decode the surface programming of hydration water structure and dynamics on the surface of proteins, membrane materials to catalyst support materials.

Postdoctoral Researcher
High-field ss-NMR spectroscopy with a focus on low-gamma and quadrupolar nuclei. DNP at high magnetic fields as well as endohedralmetallofullerenes for materials applications.